There is one topic of conversation in the prairies, especially Saskatchewan that can get everyone talking and that’s the weather.

We love to hate it here and with the extremes we witness it’s a pretty common reaction. From -50 to +40 we get to see it all. Weather is a way of life here, there’s no denying that. For the last 11 years when the extremes hit I’m out there in the thick of it, documenting every moment. From wildfires and floods to tornados and blinding blizzards I’ve had the luxury as a weather lover to experience it all.

Severe weather has been an interest and passion of mine since I was a young child, so becoming a severe weather chaser was just a natural progression for me. I’ve watched these storms my whole life and have now been actively chasing for 11 years.

For most people, they get to see the surface of chasing, what we post online when the action really gets going. There is actually a lot more that goes into it that most people don’t get a chance to see. So, I made it my goal this year to document a lot of what happens and that is where Lost In The Storm comes in, the mini-series posted to my YouTube channel.

As a severe weather chaser, the extremes of nature excite and intrigue me. There really are no words to explain the experience of watching these things unfold in front of you. It’s raw, beautiful and energizing. But I’m never happy to see the destruction these events leave in their wake. It is a gut-wrenching feeling when you see people’s livelihood and property destroyed, something I see a lot of with the 1000’s of kilometers I put on to witness these events. We are often the first people on scene after these events. Cameras off, everything comes to a stop, and you switch from chase mode to help mode. The most important thing is to check on the safety and wellbeing of any area hit. I carry a large first aid kit, and other gear like tow ropes and safety gear just in case it is ever needed. Stopping traffic so no one runs over downed power lines or other debris that may cause serious injury. There is definitely more to chasing than what’s shown on the screen.

A lot has happened in my progress in the weather field over the last year even though our typical summer storm season was slower than any year I’ve seen yet. Drought conditions settled in yet again for another year, slowing storm development. But I still managed to capture some amazing events regardless.

This year I was brought on with the Northern Tornado Project with Western University to collect data and reports from the field to aid in the research being done on detecting tornado activity in Canada, improving our understanding and prediction of severe weather to mitigate against harm to people and property. The project being a perfect fit since I’m already in the field gathering reports and sending them to Environment Canada in real-time to ensure Warnings can get to the public accurately.

While this year as a whole was slow, I started the season with two record-breaking winter storms that slammed the west central area in January and March. Winter storm chasing is its own beast. It’s funny you don’t actually see much, especially being pummeled with hurricane force winds and blinding snow. Wind so strong you’re being pushed across the ice below your feet as you walk. Really something to experience out there. It also allows the public to see how nasty things are outside the confines of town, hopefully then choosing to stay home.

People around the world find Canadian winters absolutely intriguing, so my coverage of those events made it worldwide being shown on news stations in the US, Japan, Italy and the UK. For people right here in Canada, my snow chasing antics could usually be found on The Weather Network, on news stations and radio across Canada. From trying to stand upright in the wind, to pouring coffee, and well, even strapping a pair of skates and a skating dress to prance in the middle of the ice-covered highway. You don’t have to like the weather but you can still have fun with it.

Summer storms offered up some amazing events this season as well. June 15th started it off with three tornados in the D’Arcy and McGee area. The D’Arcy tornado I managed to film from start to finish. A beautiful rope tornado that in best case scenario touched down in an open field missing major structures and houses.

The season slowed down much after that. There were only a few events in the SW regions around Swift Current that offered up some beautiful structure and amazing lightning, and East Central Saskatchewan with some large hail. It wasn’t untill very late season at the end of August when we don’t normally see too much severe weather that we actually saw an uptick in storms. August 23rd saw a tornado take out a farm near Hodgeville Sask, while the Major and Kindersley area was slammed with thick hail and flooding rains. August 27th brought more massive amounts of hail to the Mantario area again, coating roads in slippery marbles and obliterating what was left of the drought-stricken crops. The summer season ended in style with a tornado warned storm south of Moose Jaw that brought heavy hail damage once it reached Regina.

Even though the summer season has ended it doesn’t mean chasing is done, as winter actually offers up a lot to cover, and funnily enough for as much as I dislike the cold, this kind of chasing is the most fun and has helped me make a name for myself in the weather community, allowing me some big opportunities to share our crazy weather and show what Saskatchewan is made of with features on In Real Time with Costa Maragos and The Weather Network’s Candid Close Up as well as the series Weather Gone Viral on the US station The Weather Channel.

No matter the weather I’ll be out there sharing it with a smile and a coffee in hand, and showing that small town rural Saskatchewan is actually an amazing place to call home. 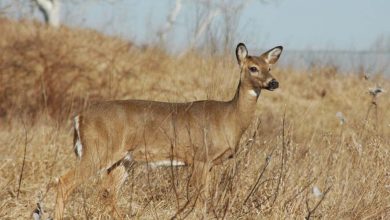